In Memory of Dr Sonia Heptonstall, Founding Member of the Alliance for Health Promotion 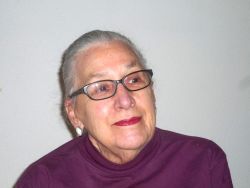 It is with great sadness that we share with you the news of the passing away of Dr Sonia Heptonstall. Sonia succumbed to COVID-19 infection on March 19, 2020.

Sonia was a dedicated human rights and women’s rights defender and an intellectual who was generous in sharing her knowledge and experience. In Geneva she represented Solar Cookers International (SCI) and Soroptimists.

She contributed in countless ways to the furtherance of women’s rights, employment, and health issues. She was co-founder and partner of ActInvest, a Swiss association focused on micro enterprise and entrepreneurship, particularly for women. Until recently she worked as Professor, International Relations at Geneva Business School.

For many years active in NGO CSW (Committee on the Status of Women) Geneva, Sonia was a key member of the task force “Celebrating Eleanor Roosevelt and the Universal Declaration of Human Rights” which resulted in a memorial to Eleanor Roosevelt being erected at Place des Nations in 2008. In work to fight harmful traditional practices, she helped in drafting the first WHO resolution on FGM (Female Genital Mutilation) and always strived to make civil society’s voice heard in international decision-making.

We will greatly miss her.

At this moment we would like to send Our sincere condolences to her husband John and her son Simon.

On behalf of the Alliance for Health Promotion

Attend the Eight’s Edition of the Geneva Health Forum November 16-18 2020 in Geneva. The theme will be Improving access to health: learning from the field. The Alliance is proud to be an associated partner of the Forum 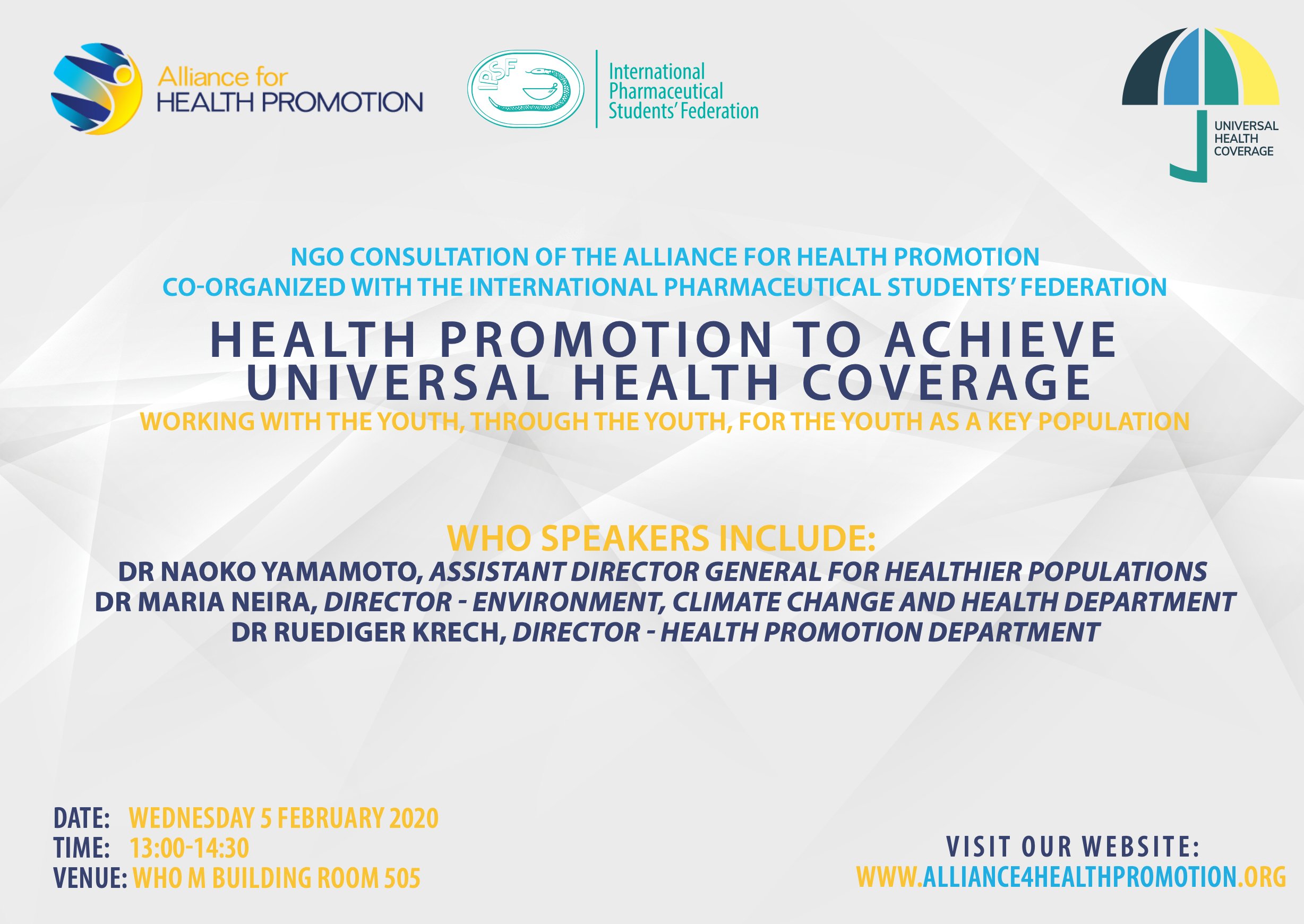 HEALTH PROMOTION TO ACHIEVE UNIVERSAL HEALTH COVERAGE –
WORKING WITH THE YOUTH, THROUGH THE YOUTH, FOR THE YOUTH AS A KEY POPULATION

Civil Society translating global declarations into local actions and impact through engaging youth and applying health promotion strategies – How to work together?

Closing messages – How to go forward

On November 12th 2019, the Alliance for Health Promotion organised the 9th Global Forum on Health Promotion in partnership with the World Health Organization. This year’s forum took a particular significance in light of the High-Level Meeting that led to the first ever UN political declaration on Universal Health Coverage. The Global Forum provided the earliest opportunity  to connect influential actors in the field of health across the globe, from representatives of governments, civil society actors academia and international organisations.

With half of the world population still lacking access to essential health services, Universal Health Coverage needs to become a priority if Sustainable Development Goal 3 on health Is to be achieved by 2030. In the UN High-Level Meeting, governments committed to act so that all people and communities will be able to access and use all the health services they need without being exposed to financial hardship.

The emphasis of the UN Declaration on the involvement of all stakeholders and on the importance of health promotion as a tool to achieve Universal Health Coverage made the 9th Global Forum particularly critical and relevant. It enabled a much-needed discussion on how different stakeholders can put the declaration into practice. The President of the Alliance, Bernard Kadasia opened the forum with a call for action and by stressing the importance of multi-sectoral approaches including all stakeholders in order to tackle UHC. The WHO Assistant Director-General Dr Naoko Yamamoto further underlined the similarities and reinforcements between WHO’s and the Alliance’s missions..  This opening set the tone for discussions between civil society members, government representatives and international organisations. In the first panel, government representatives from Georgia, Germany, Sweden and several others repeated their commitment to Universal Health Coverage and laid out a road-map for future action. The panel’s moderator, Dr Mihály Kökény, emphasized the role of health promotion in achieving UHC as well as SDG goal 3 on Health. The second panel, moderated by Dr Hussein Elsangak, gave a voice to civil society organisations and helped further translate the declaration into actions. Experts from around the world shared how their organisations are working towards UHC, from mobilizing youth to using technologies to maximize the impact of health programmes. Finally, Zsuzsanna Jakab, Deputy Director-General of the WHO, delivered the keynote speech and shared her vision on how the WHO will coordinate global efforts on Universal Health Coverage. She outlined WHO strategy to shift away from a focus on curing diseases, towards a focus on preventive approaches, which recognising the importance of health promotion.

With health experts from around the globe, and more than 100 participants, the 9th Global Forum for Health Promotion was a great success, enabling key stakeholders to share and discuss their visions on how to implement global declarations.

The Global Forum’s organizer, the Alliance for Health Promotion, is a Geneva-based civil society organisation that seeks to participate in and shape health promotion discourses by providing a platform for dialogue and collaborations between IGOs, NGOs, health practitioners, policy-makers, educational institutions and students’ associations from across the world.

To watch the video recording of the event, visit the following link: https://www.who.int/healthpromotion/9th-global-forum/en/

Full texts for two of the speeches are also available:
Rüdiger KRECH, Director of Health Promotion here: https://bit.ly/2OmMPs3
Keynote speech by Deputy Director General of the WHO, Zsuzsanna JAKAB: https://bit.ly/2CPSEsT

For updates about upcoming events of the Alliance, 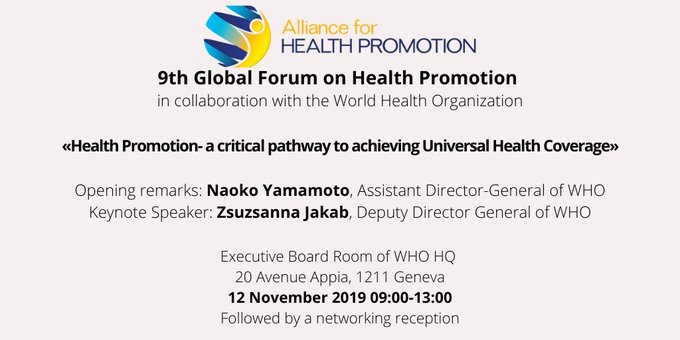 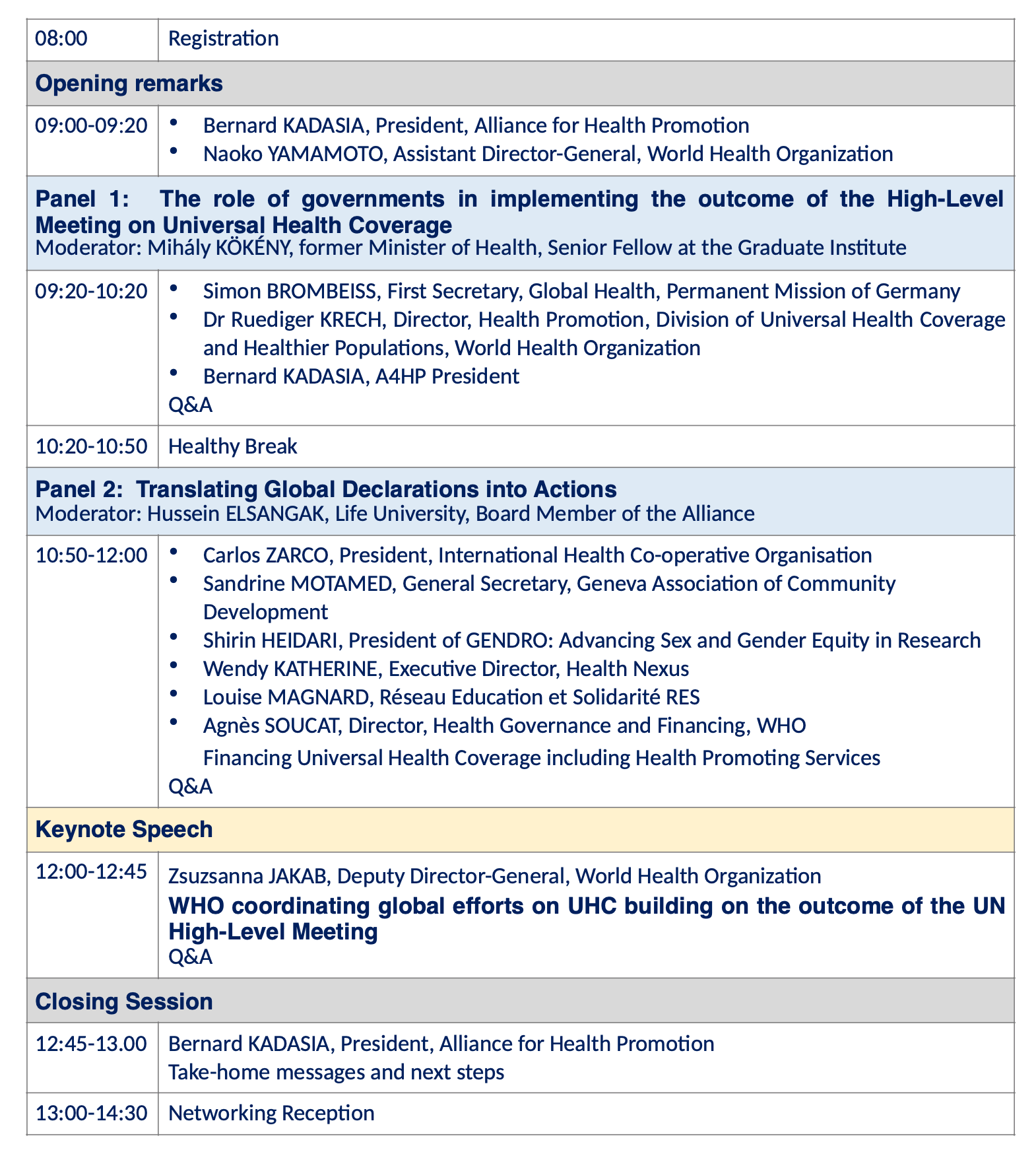 Thank you to all the participants to the 9th Global Forum on Health Promotion, for making it so successful.

To keep the conversation going you can watch and share the video of the whole event using this link www.who.int/healthpromotion/en/

Full texts for two of the speeches are also available:

Full keynote speech by Deputy Director General of the WHO, Zsuzsanna JAKAB: https://bit.ly/2CPSEsT